I just realized that the last hamster post was way back in December.
A lot has happened in little Eduard's life since then. The main thing being that he had a very rough time and is getting old. I thought he was about two and a half, but looking back I think he is somewhat younger. I don't know. I will ask Marianne.

I am pretty sure that he is going to die soon. He has been a lot less perky lately and slept most of the time. The last two days he almost stopped eating. And this morning he can hardly walk and doesn't seem to recognize me at all. :-(

Well, there isn't much I can do other than wait and see - certainly not one of my strengths... 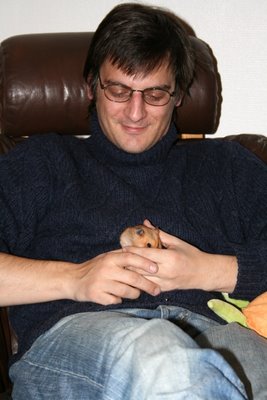 By now I am quite used to be woken and shoved into the hands of strange humans. It is quite annoying, but luckily it also is over fast. So far, the only exception to this rule has been the elf whom I stayed with last year. She had been visiting a few times and I spent some time snuggled up to her, sleeping save and sound in her sweater.
Well, there seems to be another human with whom I have to put up with. He likes to play. I have to give him that. But he is a little slow in understanding... Today, for example, he offered me different kinds of food - which is nice of him, of course - but he is slow to understand that if I don't take more carrot but keep on searching that it is other stuff I want. It took him for ever to realize that I want more chickpeas and sunflower seeds. 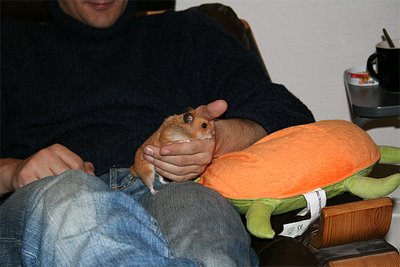 Here I am with only one stuffed cheek pouch searching for more interesting food.


I like playing with this human. But playing with stuffed cheek pouches is not really fun. After I finally got more chickpeas and sunflower seeds I just wanted to empty my cheek pouches in my lair. The human didn't get that either. I really don't get how humans can be so dense sometimes. 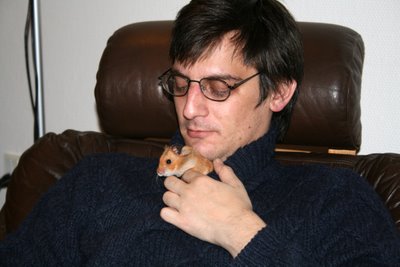 I crawled around everywhere trying to find the way back to my lair, but somehow I didn't manage to find my way back. Humans are really huge and mysterious! A few times I managed to find very dusty places. But before I could explore them further my human found me and - whoosh - I was back where I started. Frustrating, I tell you. But luckily I finally got back to my lair and could enjoy all my findings. :-)

The human is behaving strangely. Lately I have either not seen her at all for days or I see her a lot. Yesterday, for example, she came home at a time that she usually is long asleep. I was very surprised to suddenly see her walk in. I thought she was asleep. And then she got up only a few hours later again - a lot earlier than she usually does. Not that that is a bad thing. I get to see her a lot more and that means I get a lot more attention and wonderful things to eat. But it is strange... 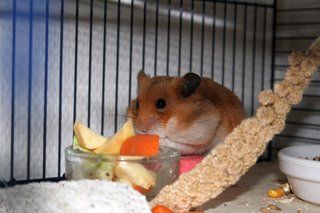 This is the delicious fruit and vegetable mix I got. 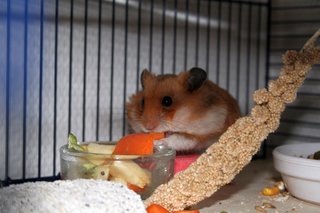 Yes, I can fit more! 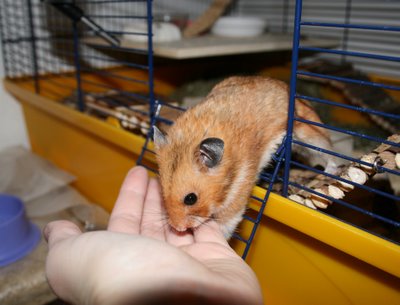 Training the human can be hard work. Sometimes she just doesn't understand. 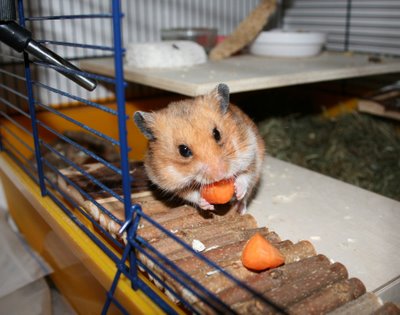 But sometimes she does understand. :-)

Weekends are horrible. They mess with the human. She never gets up before the sun has gone up, eventhough I can hear her beeing awake at the same time like on weekdays. Weekends mean that I have to get up again when the human finally is awake and up. And then she doesn't even look to see if I am awake. If I want to play or have some treats, I have to make noise to get her attention. That is soooo annoying! I wish there were no weekends.

Not So Bad After All

I have decided that it is not so bad to be back with the strange human after all. It was nicer at the elf's house where I got all the attention and cheddar I wanted, but the human is alright too. I think I will try to train her a little (I really like cheddar!). That will be hard, of course, but I'll try. ;-)

Saved By an Elf

I should have known that something was wrong when the human left my cage on the floor after she cleaned it. The next day there was a terrible earth quake in the middle of the day. I was all alone and very scared. It ripped me out of my sweetest dreams. I was overwhelmed by stranges smells and terrible noises. It was awful! Then all of a sudden everything was quiet again. It still smelled different, but the noise and shaking had stopped. I was hiding in the corner of my house trying to calm my stomach when the roof was lifted. I was afraid that more terrible things were going to happen, but everything was ok. It was an elf, and as everybody knows: elves are good to animals and take care of them. This elf is huge - like a human - but it is wearing an elf-hat and wearing elf-clothes - obviously an elf! It gave me some squash and I committed its scent to memory, so that I will be able to thank it later when I am properly awake.

I feel neglected. The human is there, but she rarely notices me. That is weired! I have made sure to get up in the mornings when I hear the human stumbling around. I even started to run in my wheel and rattle with things to get her attention. It does work. Kind of. She feeds me every morning and cleans my toilet, but she doesn't even try to play. True, I haven't been extremely fond of playing, but I kind of miss the attention. This morning I sat right in the cage door the whole time while she filled up my food bowl and cleaned my toilet. I managed to get a hold of one of her huge fingers and pulled at it a little. It didn't move. :-( But that seemed to have helped to get er attention. She stroked me. Way too little, but it was better than being ignored. I also got a nut, which helped to calm me a bit. I hope she remembers me again now that I got her attention.

Nights are getting longer. I notice because the human is still awake when I get up and gets up before I go to bed. This morning she was very awake and talkative, and since I wasn't tired yet I let er pet me. I also showed her that I wanted some goodies. She hadn't been very generous with them lately, but today she seemed to be in a good mood. I got yoghurt and sll kinds of tasty vegetables. I also found them all! (The humand tends to scatter my food in my cage, so I always have to search to find it all. Very annoying!) Now I have lots of tasy things in my house. :-)

The human is getting sneaky! This morning she lured me out of my house with yoghurt. (I love yoghurt!) Just as I was munching the delicious yoghurt she came and took off the roof of my house, so that she could get to my supplies. (She steals them all the time.) I ran back into my house and defended them viciously! Of course I defeated the human. :-) Because she couldn't get to my supplies she only cleaned my toilet which was kind of ok. In my opinion it didn't need cleaning, though... But, oh well, let the human clean if it makes her happy. ;-)

This morning when the human woke me to clean my toilet I decided to start training her again. So, I left my bed and crawled up to my food bowl (which only contained boring food) and looked very accusingly at the bowl and then at the human. She understood right away and filled up the bowl again. (Maybe training her won't be so hard after all...) Just when I had filled up my cheek pouches the human offered me a baby corn cob. I didn't want to risk her taking it away again, so I carried it off in my mouth which was quite complicated with filled cheek pouches. Unfortunately, I couldn't fit it through the door of my house, so I decided to hurry inside to empty my pouches and then get the corn cob, but the human was so nice as to shove the corn cob into the house for me, so I din't have tu hurry so much and could go back to sleep after a morning snack. :-) 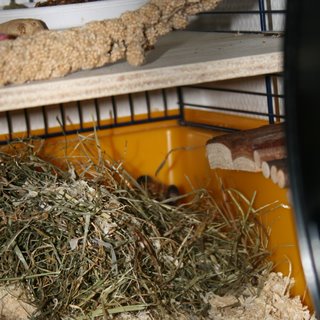 The last two weeks have been so nice and quiet and yesterday all of a sudden the world ended! I'm sure it did! My cage was raided. Everything was moved around, taken away and cleaned. All my little food stashes are gone! There was no place to hide, so I crawled up the wall between the cage and my wheel. It was uncomfortable, but I was safe! When the world calmed down again I hid in the far corner of my cage behind the hay until it became dark. Then I went searching for food. Luckily there was plenty, so I started new food stashes all over the place to be prepared for the next time when the world ends.

No more food - ever!

She was packing and cleaning - unusually restless. And all of a sudden I get heaps and heaps of food. The world will end! At least, I will certainly never be fed again. I better hamster everything at once and beg for more.... 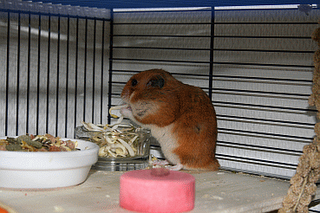 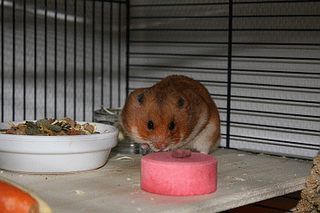