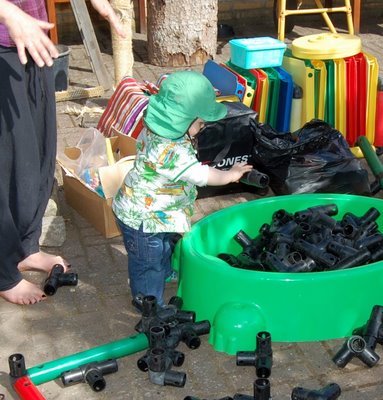 Yesterday, Christian Marius turned one. Today he had his first birthday party. The house was filled with family and friends - some of which arrived a day early and scared the heck out of him. (Grandma just doesn't look like Grandma in her nightgown.)


One of the best presents was the arrival of aunt, uncle and cousin from the Netherlands. They brought (among many other things) this outdoor building set.


Here you can see Christian Marius inspecting the linking pieces.

Of course you cannot unpack such a nice toy and expect physicists and IT-nerds (of any age) to idly stand by. The blueprints for a house were quickly sketched, and the team swiftly began with the construction. 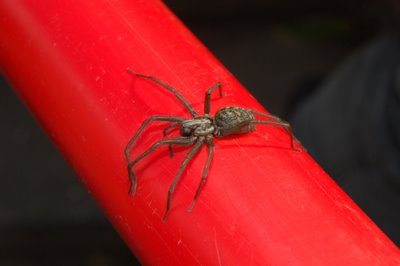 Upon reassembling the many colorful pieces we disturbed this gigantic spider which had traveled from the Netherlands to Denmark inside one of the tubes. I hope it will find a new home here in Denmark (but very far away from me!). 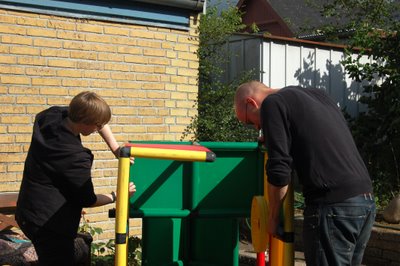 At last, it was just Kristian and I who had the persistence to finish the project. Little Christian (Marius) often came to help which earned him lots of praise from various bystanders much to the frustration of big Kristian who thought that he too had earned some praise. I must admit that it was him who did all the hard work. I was just not strong enough to turn the fastening bolts.

All in all a nice, sunny and very exhausting day. :-) 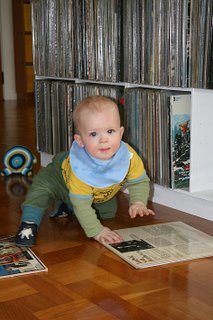 I am baby sitting Christian Marius while his parents work in the garden, specifically are digging up tree stumps. Interesting things at the moment are records, cameras (I have never seen a child crawl so fast towards one), things that make music, standing up and sitting down and tapping the table.

Today is my birthday, and I had arranged to visit friends and not to be home. I find it very frustrating to be at home and wait for people to call and be disappointed if they don't call. So I try not to be home on my birthdays. Congratulations tend to get to me anyhow.
I received the first birthday wishes via email - sent to me at two minutes to one in the morning. The second one to congratulate me was my father, who told me that I reached the age where women don't get older anymore two years ago. That really made me feel old! ;-)

I was feeling pretty shitty after two days of constant migraines and a restless night, but after hugs, more birthday wishes and a smile from Christian the world looked a lot brighter. 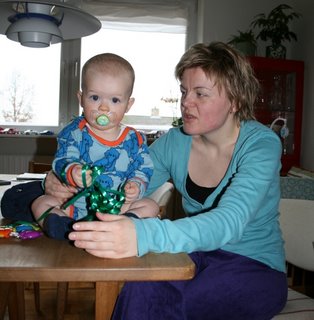 Christian (and his parents) gave me a beautiful calendar with pictures (of Christian). Unfortunately, I forgot it at their place. :-/
Christian helped me unpack the calendar. He liked the green ribbon best.


I helped to chisel plaster off a wall (which is surprisingly satisfactory) and enjoyed disassembling and reassembling the ceran stove. We poked and rattled everything that could be poked at or rattled but couldn't find what was wrong. Mysteriously, the stove worked flawlessly after we had reassembled it. Maybe it just needed poking and rattling. 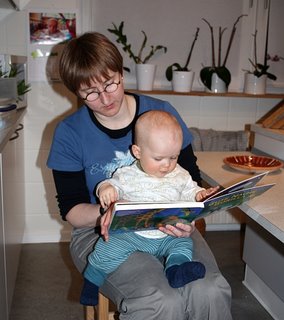 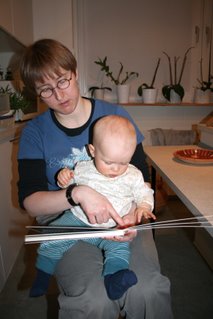 I had planned Flammkuchen for dinner. While waiting for them to get done, Christian and I read the book I took along for him... 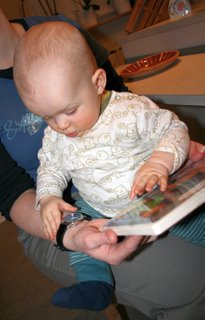 ...until my watch became more interesting and got all the attention.

When I got home, I found more emails and calls on my answering machine waiting for me - some from friends I haven't seen or talked to in years.

On Elves, Pranks, and Children

We already know that Scandinavian elves want to be treated well, or else they will be angry and play tricks on you. Today grandfather philosophied over why it is that elves will play a trick on you at Christmas regardless of how good you treat them. Thinking back to his own childhood he comes to the conclusion that elves probably also want to have a little fun once in a while, and he tells about the pranks he played when he was a child. The story with the exploding tobac seemed to have given little "me" some ideas of his own. ;-) Yes, you have to be careful with what you tell children. They will believe the weirdest things. I for example was convinced for the longest time that my father can see through walls which of course he cannot! -- Or can he?

Telling children wild stories and letting them explore the world on their own can be a lot of fun - especially if they are not your own. I went to see Christian Marius and his parents today and got the opportunity to show him that "grown up" food also tastes good. After dinner Christian, I and the table and floor around us were covered in potato. But we hat fun and were happy and full. Later, as Peter and I were bathing Christian, his grandmother remarked (quite aghast) that she would never have allowed Christian to make such a mess. I am very much aware that I introduced "eating food off other peoples plates" to Christian. And I must admit that I did so intentionally. I hope that Peter and Camilla will forgive me and that I may visit again. 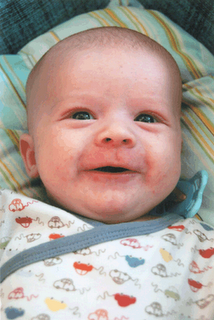 This wonderful picture of Christian is an Invitation to his baptism which I received today. I am very happy to be invited and am looking forward to the big event on Sunday, october 21st

I don't know a good equivalent for this saying in English (Leo translates it with "for the birds" which I have never heard before), but the comic strip explains it quite good - both literally and figuratively.

I can now confirm that it actually happens as described. Christian belched and Sif (the cat) came and licked it up (not all of it, she usually gets more tasty things). ;-)

Christian can almost hold his head alone now. Well, he holds his head alone for short periods of time. It will also not take very long for him to learn to turn around fully. He manages almost. Right now, there is still an arm in the way. The most interesting thing to see, though, was the way he looked at me when I spoke Danish with his father. He stared at me with very big almost unbelieving eyes. I have only spoken German with Christian and haven't been holding him while I spoke Danish with his parents. So this was actually the first time that he heard me talking Danish - and he noticed! I think that says a lot about children's development.

The Familiar, the Adorable & the Ugly 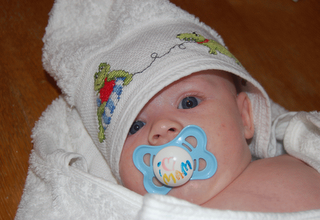 There are only three kinds of babies: the adorable ones, the ugly ones, and the ones you know. Yesterday I visited friends of mine who became parents two months ago. Little Christian Marius is both familiar and adorable - especially in the towel I embroidered for him. ;-) 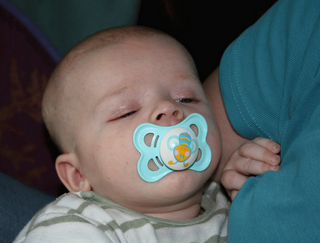