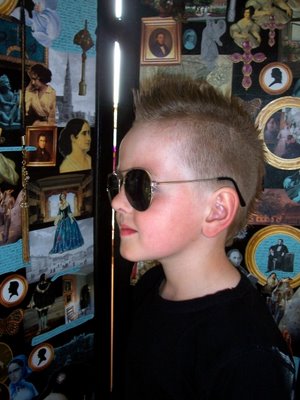 Marius had been pestering his mom about wanting to get a mohawk, so finally Marianne gave in. It suits him, too.

Apparently, it took him a while to realize that a mohawk is also suitable for men. According to Marianne, he was quite excited upon seeing one of the towns punks (with a black spiked mohawk) and exclaimed with some awe: "I thought only ladies like Diana could go with hair like that!"

I have a really hard time deciding what I find more amusing: the fact that he thought that only women could have mohawks or that he considers Diana to be a Lady. Unfortunately, I don't have a picture of Diana, but let me assure you, neither does she look like your typical lady, nor does she act very lady-like.

The Urge to Rant and Not Wanting to See the Positive Side of Things...
... at all!

Today I woke up without a headache, which is pretty nice after two days of almost-migraines. But boy - I am in a crappy mood!
I feel totally drained and just want to hang in front of the computer or stare at a wall. :-( And I don't think that I will leave the house again today. Although I had promised to go shopping for Anita. And I had planned to buy fabric for curtains. And I wanted to start on the project for Terese. And I promised to send the translated text to the digital guide to the Womens Museum. And I had planned to be active on Travian (an online game I am playing). And, and, and... Crap!

I have just been at the post office to post a BookMooch book to Sweden and pick up a package that arrived a few days ago. (Yes, Terese, it's the two Anita Blake books from BookMooch, and yes, you may pick them up tomorrow.) And I also stopped by the supermarket (the one next to the post office) and tried to buy something that I might possibly want to eat this weekend. This is a very taxing question at the moment. I can distinctively feel nausea and the urge to puke coming up with the thought of food and eating. At the same time I know that I am hungry and need to eat something. The only thing I can think of eating without getting sea sick are cucumbers. Not very nourishing... I can't even get nuts, chocolate or salmon patties down. I am definitely not well. :-/But, since I need to eat something I bought everything I usually hunger for. Except for beets. they didn't have any red beets. And I will not leave the house again. Not even for red beets. meh...

Hmm... I think, I will make some tea, launch some suicide attacks on Travian and do a lot of staring. And soak myself in lots of self pity. Until I feel some energy or creativity sneaking up on me. And I will do this all day long if I have to!

Today my father (who is visiting) and I went for a walk and enjoyed the beautiful spring day. We walked through Riis Skov woods to the psychiatric hospital where I work at the moment. 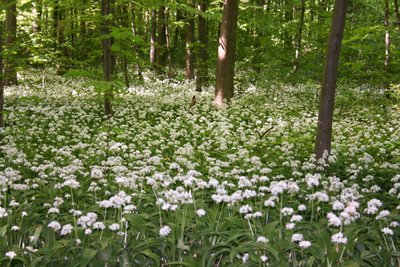 During spring the woods are covered in ramsons and you can smell it up to my doorstep. Luckily I like the smell. :-) 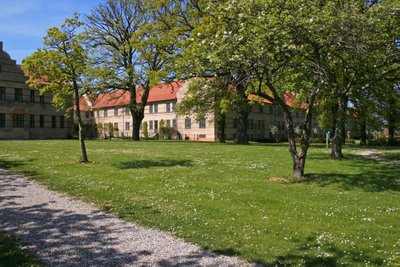 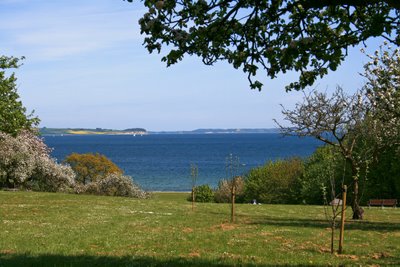 The psychiatric hospital has a very nice park which is open for the public. Here we sat and enjoyed the scenery and watched a bird watcher.