Hokuspokus PistVæk came to visit today. Not for a social call but to convince Gunvor to battle a few chores. After Questing for the Satisfied Stomach Hokuspokus PistVæk retreated to knitting and napping in the arm chair, occasionally casting a hypnotic stare and giving a little praise while Gunvor Quested for the Clear Horizontal Surface and hunted Dust Puppies. Now Hokuspokus PistVæk has long gone home and Gunvor just got done with fighting, binding and taming two Textile Monsters.
The last time the apartment has been this clean was in August. This is definitely worth a Charm of Really Good Conscience.

After a whole afternoon of painfull stomach ache and whining to my former better half, Gunvor broke through in an attack of "no-food-in-the-house"- and "no-clean-clothes-to-wear"-despair. Not only did I manage to go shopping and start a load of laundry - I also put clean sheets on the bed, started a second load of laundry, hung up the first load to dry and vacuum-cleaned the bedroom! I don't even remember the last time when I did so many chores in one day. The reason for that can, of course, be the my general inabillity to remember things or keep track of the time that went by, but I seriously doubt that. Especially since I found my second water kettle which I used to have at my old work place... I think, I really like my alternate ego. :-)


Ok, now I am beginning to sound as crazy as I sometimes feel. Or am I beginning to feel how crazy I somtimes am?

Every once in a while Gunvor manages to break through and do a little battle in my apartment. Very very very slowly (almost unnoticeable) it is getting better. But the too little cleaning is taking its toll. I found a few dishes (in the enormous heap of dirty dishes) which had developed a layer of mold. :-( I washed them, although it was very yucky, instead of letting them dry until the mold dies again, as I know some people do. I now feel like I accomplished something. ;-)

The kitchen is cluttered with dirty dishes. Heaps of clean and dry clothes inhabit all of my chairs. The wrestling stuffed animal (Fridolin) is very upset that I haven't made the bed in days. And I don't walk around with bare feet anymore because my floor is sandy. I should turn into Gunvor and battle the chores. Instead I sleep, watch James Bond DVD's (I found the whole collection on sale...), or embroider. My latest project got done yesterday:

A dragon (embroidered with color changing thread) on Terese's hankerchief 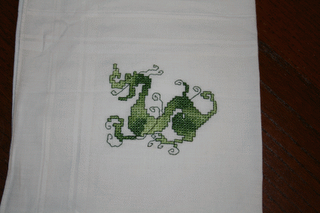 The visitor which is staying over this week for a conference is not only very friendly but also brought many gifts. I can now nourish my addiction for chocolate coated Zwieback again and wash with very well scented olive soaps.
I will pamper myself big time today! :-)

Gunvor "Quested for the Clear Horizontal Surface" in the whole appartment, and the counter in K'chen is now - for the first time ever - clean and orderly! That is definitely worth a "Charm of Really Good Conscience". :-)

An exhausting workday. A creeping headache. Fatiguing training. Wet and cold rain. Fish cakes for supper. Comforting warm Pai Mu Tan tea. Annett Louisan and then Lisa Ekdahl in CD-player while adventuring in the Land of Nullermand (a little).

The bed is calling... 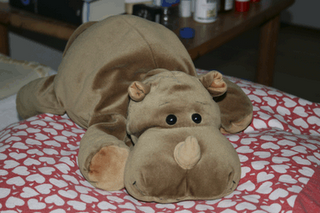 Fridolin wrestled me down again. By the time I finally managed to fight myself out of bed I was crazed with hunger and had a pounding not-enough-caffeine headache. :-(
I really have to have a serious talk with Fridolin!

Grünrolli put to good use

Gunvor used a Grünrolli to motivate Oberon to claim his XP for the last week. It worked surprisingly well, and they also managed to create the adventure "Byte'ing bits and bugs", which Oberon claimed quadruple XP for. ;-)

Things do not always only happen to me!

When I logged in to Chore Wars this morning to report the battle lost to the "Talking Blackmold" I read with relief (and amusement) that Dust Du'Orden had been "Debugging (literally) the kitchen". It is very soothing to know that these things do not always only happen to me. :-)

While "Questing for the Satisfied Stomach" Gunvor encountered a "Sticky Floor". She slew it successfully and found 28 gold pieces and a "Forgotten Candy Stash". I am not exactly sure that eating any of that candy is a good idea. It is probably what made the floor sticky (and angry)...

Gunvor is now a Level 5 Ranger.

Defeated by the wrestling stuffed animal

Woe me! This morning I was defeated by the wrestling stuffed animal named Fridolin. See his black puppy eyes luring you into ambush by making you believe he is harmless. See his pointy horn which looks all soft and fluffy - which it is not. And believe you me - he is a lot(!) heavier than he looks!

The battle made Gunvor a Level 3 Fighter. ;-)

Gunvor started out as a Level 1 Enchanter which sounded kind of nice. Today Gunvor became a Level 2 Babarian... Coincidence - or a broad hint?


a bright side of living alone :-)

Adventures in the Land of Nullermand

Our party of brave adventurers has grown to five members. We are now Hokuspokus PistVæk, Dust Du'Orden, Oberon, Starmetal Chef and Gunvor (that's me), and I am still waiting to hear from two more. :-) Strangely enough this seems to work for me. And a good thing it is! This morning, for example, I had the hardest time ever finding clean and dry clothes. I managed, but it wasn't easy. So beware, fellow adventurers! I will cast myself into battle as soon as I get home!

A school friend of mine mentioned in her blog that she and her husband actually get a clean appartment with the help of Chore Wars. So of course I had to check if this is something I could use too. (Those who know me know that my appartment at times looks as if a bomb exploded which almost always requires a flame thrower (or something of the like) to master the chaos again...) I am very happy to anounce that I am now member of a group of three adventurers participating in the Chore Wars. I think that we need to get in touch with each other very soon, though, and talk about rewards and the like. This will be quite a challenge since we all live alone and in separate countries. Let see if we can keep this alive for a while. ;-)