I took Friday and Monday off to spend a long weekend with my mom at her vacation house. I hadn't been there in years, so my mom described all changes and ended her account with "Every time I get there, a new surprise is waiting". She was right!
When we got there, the whole floor was covered in tiny bits of rubber foam. We found out very quickly that the rubber foam used to be the innards of a pillow, obviously scattered on the floor by a mouse who had made the pillow its home. Mice in the house! An aspect neither of us was looking forward to.
Well, the friendly neighbour knew what to do and came over with a mouse trap (the kind that breaks the mouses neck when it snaps) babbling away about how many mice and rats he caught and about the bad quality of today's traps. Apparently, they fall apart after being used 5 times. He almost caught his finger in the trap as he set it up which also resulted in the trap falling apart. ;-) He managed to set the trap up eventually.
I don't really know what I was thinking, but it was quite a choc for me to come into the kitchen later that evening to find a mouse in the trap. And even worse - the poor thing wasn't even dead. Its head was caught, and it was slowly being chocked in the trap. :-( Neither my mom nor I could bear the sight. So my mom put the trap with mouse outside, and I freed the mouse. I must admit that I am quite a chicken. I have never seen a live mouse before (or a dead one for that matter). I didn't feel that it was OK to take my time to look at the poor thing, and work myself up to touching the mouse, so I freed it with help of a fork and knife (they were handy). Somehow my mom found that very funny. The mouse was able to stand up, though it didn't run away at once. It was gone when I checked later, so I am quite sure it recovered. It was a grey mouse, by the way, with a dark stripe down its back. It looked a little like a skinny hamster with a very long tail.
We didn't put the trap up again (or any others) and sealed all the cracks we could find with foam insulation. I don't really think it will keep out the mice, but maybe it will ward them off for a little while.

This morning on my way to work I noticed that the woods are getting green. Not the trees - it is way to early for that! No, it's ramsons (Bärlauch, rams-løg) that is coming up. The forest ground is already covered with a thick green carpet of ramsons. Soon everything will smell of garlic. :-) Maybe I can persuade Terese to collect some with me?

I've been surfing the net and found some web comics that I want to share. I read them all today - eating nuts and chocolate continuously the whole time. Somehow reading still requires enormous amounts of enery. But back to the comics.
The one I like best is a fairy tale called "No Rest For The Wicked". It is a "different" kind of fairy tale and reminds me very much of the book "Kissing the Witch" which is a book about classic fairy tales in new skins.
Another nice one is "Gravity" - normal and strange at once. And totally unpredictable.
And then there is "The Dreamwalker Cronicle" an indian fairy tale - I think.
These are my favorites for today. I will put them (and others) on my Blogs and Hompages page. Maybe you will enjoy reading them as much as I did. :-) 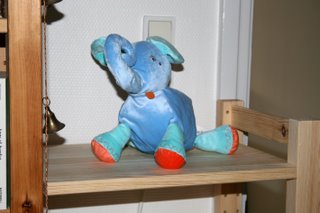 I managed a trip to IKEA and bought the shelves I had made room for. On the way out I found this baby elephant. He tried to hide on top of a shelf behind a very orange hippopotamus and looked very scared and lonely. So I freed him and took im home. For now he sits on the new shelf and practices standing. He is not there yet as you can see... I have been pondering what to name him. Anyone out there with a good suggestion?

I can't remember where or when I found this little tool, but you probably have noticed it sitting in my link section (here to the left). After this mornings chat with Terese, I feel that I need to explain how I am using it, and what it is a measure of. 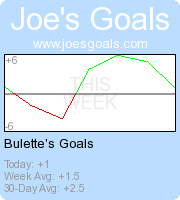 So, if we take a look at todays picture (a whole week is shown at a time with today beeing the point at the right hand margin), we kan see that I actively went and did something that I know will make me feel bad and know how to avoid on Sunday and Monday, and that I didn't do anything that will make me feel good on either of these days (if I did, the curve would not be red since the points would cancel each other out). The other days of the week, on the other hand, I predominantly did things I enjoy. However, this does not mean that I was feeling good during the time. It only means that I actively did something good for myself.

I am so proud of myself! I finally managed to move the furniture in my living room. I've been wanting to do this for two months. :-)
I am not entirely sure that I like it, but it looks more tidy (which probably also has something to do with the fact that I tidied and cleaned...). I also need to move one of my pictures and put up another one. Maybe it will be more "whole" then. But I definitely needed a change, and a change it is! Unfortunately, it is now extremely apparent that some throwing away is inevitable. Apart from the new books, there is also a huge pile of things floating around. And eventhough I managed to find room for an additional part of the shelf-combination I have (IVAR from IKEA), it won't be enough. :-(
By the way, is there anyone out there who has one (or more) spares of those IVAR shelves to combine 50 cm and 30 cm shelf racks? I mean the kind that is 40 cm wide and can be hooked up to a 50 cm shelf rack on one side and a 30 cm shelf rack on the other with a slanted front. IKEA doesn't have them anymore (of course), and I could use another 3 - 4...


Think of the Good Things in Life