Pinella gave me a tour of her garden. I was standing outside and staring into nothingness when she came, meowed and nudged me into following her.
We went into the garden where she showed me the lawn with the trampoline which is - in her eyes - the perfect spot to settle down on someones lap and get stroked. She led on to the little greenhouse with the compost beside it and a climbing tree with an old tree house right across the path. Then on we went to an old platic junglegym with slide which now is Pinellas sun bathing spot. Behind a rather large garden shed is another strech of lawn with a set of swings which according to Pinella are off limits. She dashed across this stretch and joined me again behind the swings in the shrubs. I counted four different kinds of blossoms in this tangle. I am sure there is hazel and apple, but I have no idea what the rest is. In eather case it is home to a ton of different kind buzzing folk which Pinella and I watched for a little while.
I returned when my bare feet began to freeze in the damp grass. Pinella was not quite ready to leave, but she joined me a short while later napping in the sun on the trampoline.

I keep expecting her to be there when I look up.
In the mornings, half asleep, I reach out under my bed groping for soft rabbit fur. Then I realize with a pang why I can't find her.
I wake up at night listening for soft rabbit noises which aren't there any more.
I open the balcony door and wonder where the hop-hop-hoping sound of heavy rabbit feet is.
There are so many situations and sounds that feel completey wrong without Penelope. I was not ready for her to die.

Pinella has been here a few times - searching and meowing.
My father plunged into cleaning and organizing, putting all rabbit gear away.
The apartment feels empty and a little cold now. Penelope was a vital part of my refuge here and a well of energy and regeneration. I feel out of balance. And I cannot decide if I feel empty of if my inner self is telling me to burn some more bridges, make some drastic changes, and start a new chapter in my life.

I feel like howling, but I am not yet ready to let her go.

And Then She Died

Penelope died shortly after we got home - almost in our arms.
She was atonic and couldn't drink anymore.
She gasped for air.
And then she died.
Her beautiful big ears limp and lifeless.
Her fur soft as ever, slowly turning cold.
Dead - gone forever.
Goodbye.

Now my body has realized that I am on vacation and is demanding a lot of rest. I sleep a lot and the only thing I can motivate myself to do is to take the bus into town and drink coffee at a sidewalk café. But it takes forever to get up and going in the mornings.


That is also why my father had to take Penelope to the vet alone, yesterday. And then they didn't come home again. For hours I waited and got more and more worried. Finally, my father came home with a very tired Penelope and a big plastic bag full of medicine - a drip to rinse her kidneys, shots with anibiotics, shots with pain-killers and powdered rabbit food which we are supposed to mix with water and force feed her. :-( The vet gave her one treatment right away and we are supposed to continue with that for the next days. The vet wants to se Penelope again on Tuesday. 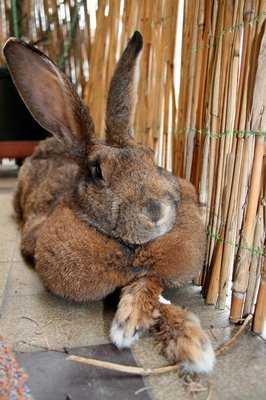 The pain-killers seemed to have done their job well: Penelope went to sit on the balcony for the first time in a long while. It is a little hard for her to get there, since she has to hop over the doorsill which is a little high. Penelope enjoyed a sunny afternoon on the balcony and Pinella came to visit a few times. 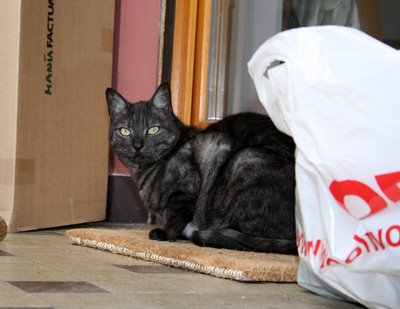 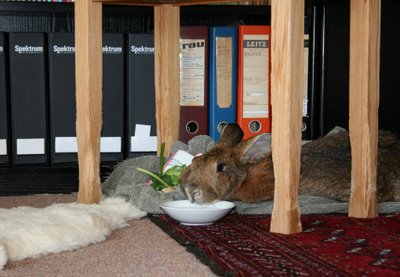 Today Penelope is not well. She doesn't hop at all anymore and nearly stopped eating. I had to carry her into the living room. She survived the first drip and shot but cannot be convinced to eat. She also looks very tired and beat. :-/

I am on vacation, and boy, do I need them! I am visiting my dad in Saarbrücken and it feels like a totally different world here.

First of all, it is summer here. At least that's what it feels like. I knew it would be warmer here than in Denmark, but I was not prepared for that much sunshine and temperatures which are about 10°C higher than back home. 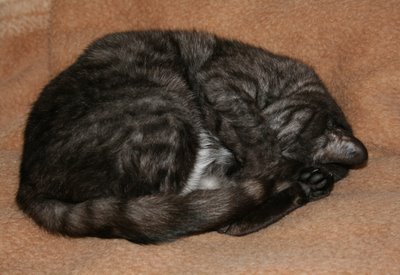 And secondly, I was obviously dearly missed. Penelope recognized me right away and started making content nibbly noises even before I began to pet her. Ever since I have been back she tries to be close to me which is quite a hard task for her, since she can barely hop any longer. Pinella also recognized me at once, and although she doesn't stay as much as she did last time I was here (her family is at home this time), she comes and demands to be petted a few times a day (which makes Penelope extremely jealous). Whenever I sit down the two ladies come and settle down near me. ;-) 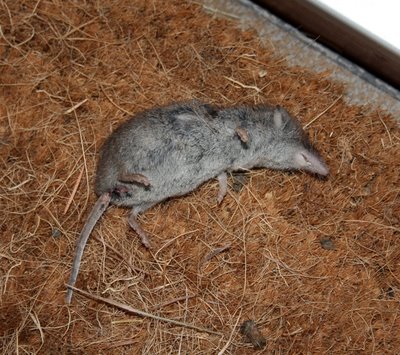 Yesterday morning Pinella presented us with the gift of a mouse - dead. We were honored, but decided to let it vanish in the depth of the trash can. Actually this is quite an event. The nice neighbours, who alway feed Pinella, have not had that honour. :-) 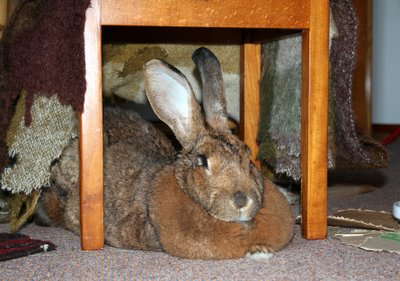 Apart from barely being able to hop, Penelope also has problems cleaning herself properly. She cannot reach some parts of her body any longer. Already last time I was visiting, she allowed me to help her sort her fur. Today she totally surpriezed me by allowing me to peel crusty and dead skin out of the inside of her ears. Rabbit ears are very very sensible, and most rabbits won't allow any human to even touch the inside of their ears. Not only was I allowed to touch them, I was allowed to scratch, pinch, and pick at them! I tried to be very careful, but it must have hurt anyway. She seemed to be glad, though. She kept perfectly still and held her ears open and in my direction, and she was not at all happy when I got cramps in my legs (from kneeling and crouching under the stool) and stopped. Let me tell you: The inside of rabbit ears are the most soft part of a rabbit - much softer that their noses or tongues. :-)