I got another book package in the mail today. :-)
However, I suspect that my mailman is getting quite tired of having to haul my packages around. I greeted him today with a happy exclamation of "Ooh! More packages!" and received a very annoyed look...
Tell you the truth: I don't care! I got more books, the sun is shining, and Anne-Mette and I will go into town later. :-)

At least not in Canada. It is sooo gross!

I read this post (on one of the blogs I frequently visit) about how someone in Canada sued McDonald's because he found his "human right" not to wash his hands violated. And he won!

I find that very disturbing and very very insanitary. I am not going to eat at fast food places again. Not that I do that very often to start with, but this is so disgusting. 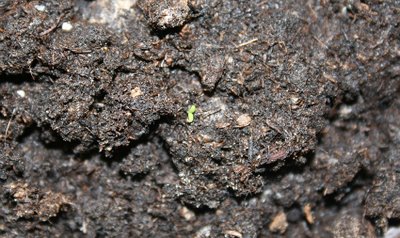 This is lemon balm (Zitronenmelisse, citronmelisse eller hjertensfryd). Or better, it will be at some time when it's bigger...
# posted by me @ 12:29 0 Comments 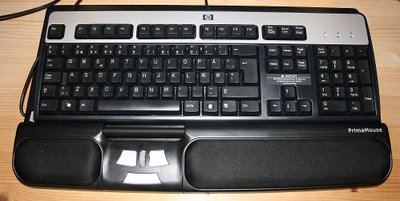 I bought a mouse trapper (or bar mouse) for my computer at home after I noticed that my right shoulder and arm all of a sudden ached terribly. I knew that kind of pain in my right arm and shoulder from the times I worked overtime a lot. I tend to lean on my "mouse arm" when working in front of the computer. So I decided that this was enough, and since I obviously cannot sit up strait I better chance my computer gear. We have mouse trapper at my new work place, so I knew what I wanted and knew where to get it. This is my new mouse trapper. Unfortunately the inbuilt optical mouse died on the first one I had, so I had to get it replaced. But the company exchanged it super fast and without any problem. I really love my mouse trapper! :-) 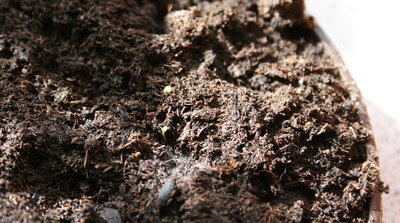 I also noticed today that the first sprouts of marjoram (Majoran, merian) are comming up. I got the seeds (among others) from Achim as a birthday present.

This comic is somehow in a way a nice description of the "Embroidery and Baileys Club" that a few friends and I founded. ;-)

I think I will soon get an entry in the Guinness Book of Records because I have the best mom in the world.
- Marius, 7 years

Recently I went amok on amazon and BookMooch and ordered more books than I probably will read in the next year. I have been to the post office twice already to pick up packages. They were delivered there because I wasn't at home when the mailman came. Today I was at home. When I opened the door I was greeted by a very relieved mailman who had "a ton" of packages for me outside on his bicycle. "A ton" was four. Three not so big but heavy packages containing books and one larger but lighter package from France. It was quite a task to open the french package. Last time I opened a french package I nearly broke my finger by trying to rip it open. They are so sturdy! This time I used a knife and nearly destroyed its contents. It was a lot easier to unpack the books.
Ha! I am so happy! Lots and lots of new books! :-)